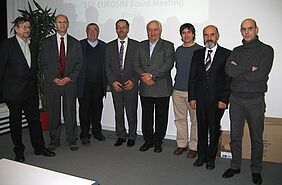 It was noted that an application for membership from KA-SIM (Kosovo) will be expected in the next EUROSIM Board meeting. Prof. Hajrizi will submit an application and full documentation to the president.

MATHMOD 2012 was organised as a EUROSIM conference. A sum of app. 3000 Euro will be transferred to the EUROSIM account.

The president Khaid Al Began reported about preparations of the Cardiff Congress. www.eurosim2013.com is active.

Esko Juuso informed the Board that SIMS Board has discussed and approved the proposal for SIMS to organise the EUROSIM Congress in 2016. The Congress will be held in Oulu.